This results in less ash and black carbon particulate matter (PM) and nitrogen oxide (NOx) reductions of typically 30%, which are significant reductions for improving local air quality and lowering the global warming potential of fuel oil use.

MSAR® is fully compatible with Exhaust Gas Cleaning Systems, EGCS or “Scrubbers”, which can be used in marine and power applications to reduce emissions of sulphur oxides (SOx), NOx and PM.  The reduced fuel cost from adopting MSAR® can also be used to subsidise what may otherwise be unaffordable abatement options.

The emulsification of hydrocarbons to produce an “oil-in-water” fuel is especially beneficial when burning heavier residual fuels with more challenging combustion characteristics such as higher asphaltene levels.

The MSAR® process results in a ‘pre-atomised’ fuel with a particle size range of 5-10 microns (µm) typically, which is similar in diameter to a red blood cell, and much smaller than is possible through conventional oil atomisation (which results in 80-100µm at best).

When a fuel is combusted, the burn occurs on the droplet surface.  The micro-sized MSAR® fuel droplets have orders of magnitude higher surface area than conventional HFO enabling rapid and complete combustion, as illustrated above.  This results in enhanced fuel efficiency and environmental benefits.

Particulate matter (PM), including black soot, of which black carbon is a major component, is emitted during the combustion of solid and liquid fuels, such as for power generation, domestic heating and cooking and in vehicle engines. Soot is formed from carbon when there is incomplete combustion of the fuel and is less than 2.5 microns (µm) in diameter (with PM2.5 known as fine particulate matter). 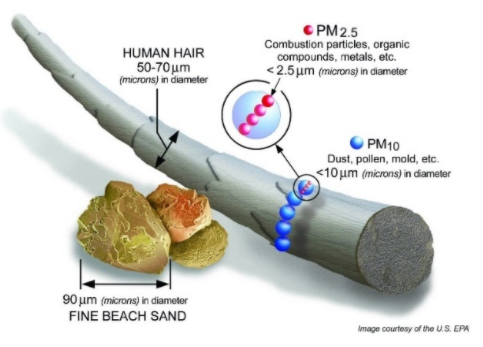 PM is an air pollutant, with negative implications for human health and the global environment.  The inhalation of PM can have adverse health impacts, with the biggest impact on public health believed to be from long-term exposure to PM2.5, with effects including respiratory and cardiovascular disease, cancer, and even birth defects.  Exposure to high concentrations of PM can also exacerbate lung and heart conditions, significantly affecting quality of life, and increase deaths and hospital admissions.

PM and black carbon have adverse effects on the environment and contributes to climate change. Haze is formed when sunlight interacts with small particles in the atmosphere, PM absorbs solar energy, which results in warming of the atmosphere, and like all particles in the atmosphere, they change rain and cloud patterns, though as the effects on the latter vary, scientists do not know yet exactly how much black carbon contributes to global warming.  When black carbon falls to earth with precipitation, it darkens the surface of snow and ice, decreasing their albedo (the reflecting power of a surface), warming the snow, and hastening melting.

MSAR® will burn down to the fuel ash, with virtually no black soot remaining. This makes the production of particulate matter insensitive to combustion air levels and asphaltene levels in the fuel, thereby offering the opportunity to reduce excess air and further enhance efficiency.

In the ash samples shown below it can be seen that high levels of unburnt carbon, which give the ash its black colour, remain in the conventional baseline Fuel Oil No. 6 ash, whereas the ash from the MSAR® samples are defined by the inorganic products.  The inorganic nature of this residual ash enhances its suitability for recovery of valuable metal constituents, such as vanadium, which is a valuable component for steel manufacturing and in redox batteries for power storage, as well as nickel.

NOx is a generic term for the nitrogen oxides that are most relevant for air pollution, namely nitric oxide (NO) and nitrogen dioxide (NO2).

Like PM, NOx is an air pollutant, with negative implications for human health and the global environment.

NOx and volatile organic compounds (VOCs) can react in the presence of sunlight to form photochemical smog, which is a significant form of air pollution. Children, people with lung diseases such as asthma, and people who work or exercise outside are particularly susceptible to adverse effects of smog such as damage to lung tissue and reduction in lung function.  NOx has also been associated with heart disease, diabetes, birth outcomes, and all-cause mortality, but these non-respiratory effects are less well-established.

NO2 can react in the atmosphere to form nitric acid, which contributes to acid rain.

MSAR® fuel is extremely stable and can be distributed optimally in the combustion zone. Water in the fuel immediately evaporates, causing secondary atomisation and distribution. This water also reduces combustion temperatures (by over 100°C), typically reducing emissions of nitrogen oxides (NOx) by over 20% and in some cases up to 50%, as illustrated below.

Emissions of carbon dioxide and sulphur oxides are largely a function of the hydrocarbon used to manufacture MSAR® and generally comparable with conventional fuel oil.

SOx is created when sulphur containing fuels are combusted, with 95% of the SOx is sulphur dioxide, SO2.  SO2 is also released naturally by volcanic activity and is a by-product of copper extraction. It is responsible for the smell of burnt matches.

SO2 is a toxic gas and is directly harmful to human health, and depending on concentration can cause chest pains, breathing problems, eye irritation, a lowered resistance to heart and lung diseases and even death though at normal atmospheric background concentrations there should be no ill effects to a healthy person.

A secondary effect is the formation of sulphates (and nitrates), in the form of aerosols or very fine PM, with the effects of PM noted above.

From an environmental perspective SOx, under certain conditions, can be converted to sulphuric acid and thereby contribute to acid rain

Modern combustion technologies and Exhaust Gas Cleaning Systems (EGCS, or “scrubbers”) are today increasingly installed in industrial facilities to reduce the impact of sulphur oxide (SOx) emissions to the environment and human health.

The savings that fuel oil users can achieve by adopting MSAR® fuel can be used to subsidise what may otherwise have been an unaffordable abatement option. Quadrise has significant commercial experience with EGCS Systems and close working relationships with flue gas desulphurisation technology suppliers for both marine and land-based solutions.  FGD technology is capable of removing more than 90% of the SOx in the flue gases.

MSAR® fuel is fully compliant with such technologies and has favourable features that reduce the environmental impacts from combustion including SOx, NOx, PM/soot and ash.

MSAR® fuel can be stored and transported at ambient temperatures of typically 20°C, compared with fuel oil that requires heating to 50-100°C depending on the viscosity grade.  As a result, the energy requirements for handling and transporting MSAR® are lower than fuel oil.

Operating procedures and contingency plans can be easily adapted for MSAR use. If spilled, MSAR® poses fewer environmental risks than fuel oil, of which some 450 million tonnes is handled annually. Crude and fuel oil spills at sea tend to float on the surface, forming suffocating oil slicks, to which chemicals are typically applied to disperse the slick.  Should an MSAR® spill occur in the ocean, it disperses readily as it is water miscible and the micron sized droplets of residue are rapidly consumed by natural bacteria in the water.

The toxicity of MSAR® is largely a function of the refinery residue or heavy crude oil feedstock, which is generally lower than fuel oils that contain material quantities of lighter, more toxic, hydrocarbons.

Water for the MSAR® process can be derived from a number of sources including standard utility water, desalinated water, oil-contaminated wastewater or sour water stripping streams that are conventionally sent to water treatment, or disposal by oil refineries.